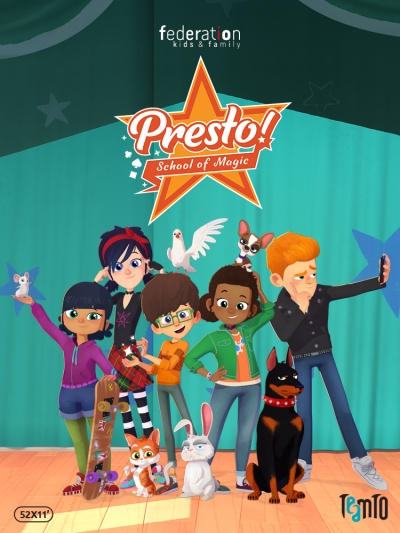 “This multi-faceted effervescent series has so many entertaining and exciting elements guaranteed to entertain kids and families the world over,” noted Federation Kids & Family head of sales Monica Levy. “Literally upon presentation, sales were (almost) instant, and so far, we are delighted to announce these broadcaster deals and look forward to finalizing further sales over the coming months as Presto! continues to spread its magic.”

Presto! School of Magic (52 x 11’) is based on StudioCanal’s popular theatrical release, The House of Magic, featuring a band of talented and curious kids who dream of becoming magicians. Star students Dylan and Lisa cannot believe how lucky they are to be part of this new school. Lorenzo, a retired magician of international renown, and his nephew have turned their old mansion into Presto! School of Magic, where Lisa, Dylan and fellow aspiring magicians Nica, Violet, and Vincent, learn the tricks of the trade. They all have a different reason for attending the school – but they have one thing in common: a passion for illusion, conjuring and the art of magic!

The series is produced by TeamTO, in association with La Compagnie Cinématographique, Panache Productions and Thuristar, in co-production with VRT-Ketnet.